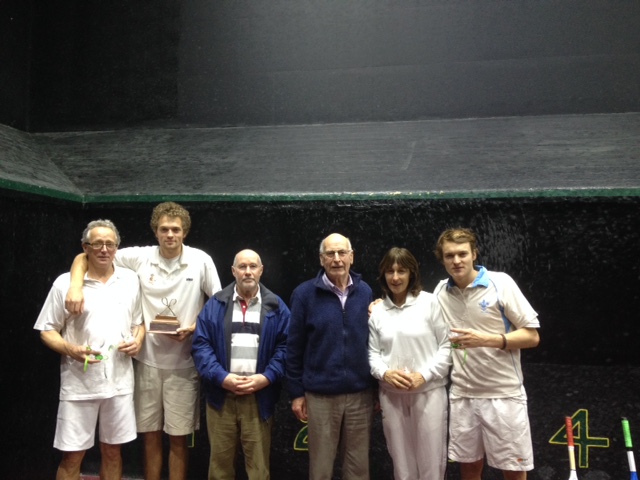 This year’s tournament was the 25th and 12 pairs entered, including three generations of the Bevan-Thomases, and last year’s winners Charles and Columbus O’Donnell. Groups 1 and 2 played on the Sunday with winners, runners-up and one lucky third place to go through to the quarter finals. Tim and Gus James prevailed in Group 1, with the O’Donnells as runner-up. Lulu and Francis Hutley beat Peter and Isabella Maxton into second place. The third places were between Tim and Harry B-T and Rory and Sebastian Scott, the Scotts got the nod on the basis of a better games count. Lulu Hutley deserves a mention for winning a great rest against David B-T by volley returning a fusillade of balls driven at her corner.

Monday began with Nick and Oliver Harris taking on David and Luke Fortune who prevailed, next up Tim and Oscar Parker edged Tim and Guy B-T, and then the Fortunes and Harrises collectively managed to record a double bagel. Despite this setback the Harrises managed to hold their nerve against Tim and Guy B-T and record a win. The Parkers had already claimed winning position, but the last match (B-Ts vs Fortunes) offered any permutation for runner-up and third place for the other pairs. The Fortunes after a nervous start pulled off a second win to get second place and give third to the Harrises.

The group stage was notable for the success of the pairs with the higher handicaps with three pairs looking like good bets, the Jameses, Hutleys and Parkers. However it is fair to say that the lower handicap pairs had many opportunities to win but seemed to play tentatively at crucial points.

The first QF featured the Jameses vs the Harrises; Nick and Oliver on one serve, bar tambour and owe fifteen and Tim and Gus receive 30, this was a step-up from the earlier tough handicaps and Nick made it tougher by hitting three tambours, the Jameses marched into the next round. The Hutleys trounced the Fortunes; the Parkers had peaked early and lost to the Scotts, and the Maxtons were too much for last year’s winners.

SF1 saw the Hutleys beat the Jameses, with Francis demonstrating that his game is rapidly improving. In SF2 the Scotts, with left hander Sebastian proving a useful foil to his father’s delicate chips took on the Maxtons. Peter was serving well and Isabella has worked hard at her game, and had already beaten their opponents looked favourites, however the Scotts with a 7 point handicap advantage had other ideas and with Sebastian playing much more confidently edged a win.

The 8 game Final was then between the Hutleys and the Scotts’ 5 point advantage giving them owe 15 every game. The Scotts started steadily, with Lulu Hutley looking somewhat shocked at getting to the final, and moved into a 3/0 lead and held their nerve up to 7/1 when a late burst from the Hutleys looked like they might turn it around but the Scotts held on to win 8/3.

It was a very good tournament which all (well nearly all) the competitors seemed to thoroughly enjoy. Tom and Louis’s marking was excellent and the tournament ran very smoothly. If you normally go skiing at this time of the year I suggest that you leave it a bit later next year and get your entry in early, it would be good to see The Bevan-Thomases, the Harrises and an all-female pair amongst the winners in the next 25 years. 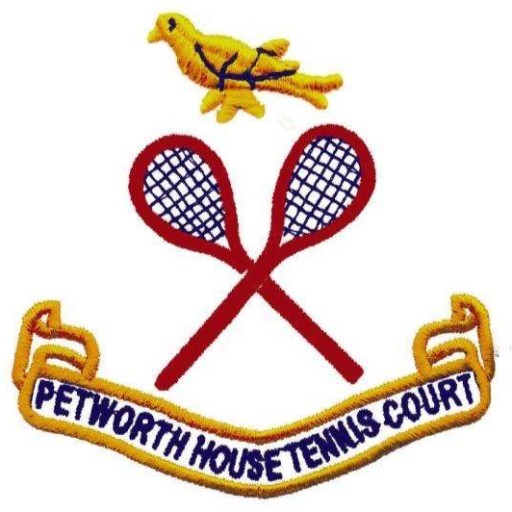 As you’ll see the site has had a design makeover. Behind the scenes the site has been rebuilt on a platform that allows for easy additions and modifications of content to be done by the Professionals and officers of the Club, which means you should be seeing regular news updates on the site.

Most of the content from the previous site is still available and can be accessed using the menus at the top of the page. In addition some new content has been added which we hope members will find useful.

This new website has been designed by Jon Petersen (one of our members) and I would like to express my sincere appreciation to him for his excellent work. If you have any views on the new site please post a comment. If you’d prefer your comments not to be public or if you have any content you’d like to see added to the site please contact the Web Site Coordinator.

This weekend we had some great tennis played at the club with loads of support for the home teams!

Richard White led his division 8 National League team to a 3/0 victory against Oxford with Andrew Falk coming back from a set and 5/2 down to win in three sets! Well played to Richard White, Andrew Falk and Simon Armstrong.

This was our first home match for quite some time and we had a great turn out of Petworth supporters to cheer on our players.

We lost the first doubles match in a very tight encounter but after that it was more straight forward and we managed to win the match 4 rubbers to 1. Thank you to the PHTC Field Trophy team and especially to Harvey Rawlings for providing a great lunch.
We are now rewarded with an away match up at Jesmond Dene, Newcastle on 31st January! – Full results are below:

This Sunday Petworth will host our first Field Trophy match of the season against Hatfield House, so I highly recommend you come down to watch what will be some great singles and doubles.  The order of play is below:

Petworth were in hot form today winning all four doubles matches against the Hamsters and thank you to Tim Parker for match managing the match and to Mrs Parker for cooking a delicious lunch for the players!

Petworth provided a lot of players for both sides and there was a lot of very good close tennis played with honours even by the end of the day – Thank you to Harvey Rawlings and providing lunch.

One Direction proved too strong for Ladies & the Tramp winning the fixture by 5 sets to 1 and scored a hefty 8 points in doing so.