As you may know we are holding our summer drinks party at Champs Hill on Saturday 28th May 2016 at 6-8.30pm

This will be our sixth annual party we have held there thanks to the kindness of David and Mary Bowerman.

Their lovely gardens look at their best at the end of May and in addition they always have an exhibition of paintings on display.

Application forms are available from the club.  Please ask the Professionals

The first day of the FINAL ELIMINATOR starts today!

World No1 Camden Riviere and World No3 Steve Virgona will face each other in a best of 13 set match to see who will challenge Rob Fahey for the World title….

The Ladies British Open which is being held at Seacourt Tennis Club is also available to watch live on YouTube from today. 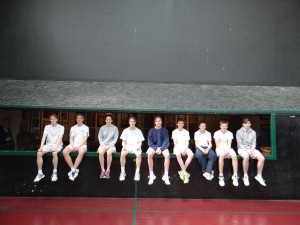 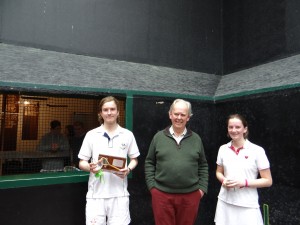 and there was some fine tennis on show by all players competing. Monty was looking to win the title for a third consecutive year but could not find his form and did not quite make it through the group stage. Isabella stormed through the first group winning all four matches and Sebastian sneaked through in second place with three wins and one loss (to Isabella). In the afternoon group it was Hugo who played some outstanding tennis to win all three matches and Theo who just got through as runner up on a head to head count back!

In both the Semi-Finals there was a 26 point difference in handicap which equates to rec 30, owe 15 and one serve, ban tambour! Theo put up a good fight against Isabella but lost out 6/2 and Sebastian was just too strong against Hugo winning through 6/0. So a re-match of the group match and Sebastian was out for revenge against Isabella! The final started off very tight with both players looking a little nervous, but as time went on it was Sebastian who started to find his groove with some outstanding serving and retrieving and went on to win by 8 games to 2.

Sunday 3rd April – Page Cup – With the five time winner Charlie Braham absent this year it was a real chance for our 6 players to get their hands on the Cup! Once again we had two groups playing for two

places in the final. In the first group the top seed Oscar Wright won both of his matches comfortably to go straight through. In the second group Hugo Hodgson (the 2nd seed) started off a little nervous but played very steadily to also come through comfortably.

After everyone enjoyed a great lunch Oscar and Hugo took to the court for what was to be a great game of tennis. The first set was nip and tuck all the way to 4 games all and then Oscar just edged a couple of tight games to take the set 6/4. He then raced through to a 5/1 40/0 lead in the second set but Hugo was not quite finished yet! He saved 5 match points to win that game and then got all the way back to 4/5 when Oscar managed to steady himself and close out for a 6/4 6/4 victory. I would like to congratulate both players on some lovely tennis played in great spirit.

Our thanks to Carole Muir for first class lunches on both days, to Philip Robinson for presenting the George Cooke on Saturday, to the Page family for supporting both days and presenting the Page Cup on Sunday and to family members and club members that were able to come along to support these events.