We are delighted to announce that Louis Gordon has been awarded the Henry Johns award which is given to the best young Professional under the age of 29.

The decision was made by the T & RA Tennis Committee to award Louis for his achievements both on and off court, including obtaining a merit on his CPD level 1.

This award is thoroughly deserved and I am sure that you will join me in congratulating Louis when you are next in at the club.

Last weekend we had 7 pairs fighting it out to win the Philip Robinson Trophy Doubles.  On the Saturday we had three matches that all went to three sets and started with the defending champions Simon Armstrong and Andrew Falk being pushed all the way by a new pairing of Harry Chetwood and Jonathan Norman.  In the second match Jon Petersen and Charles O’Donnell sneaked an incredibly close 2 hour contest against Robert Muir and David Bevan-Thoma 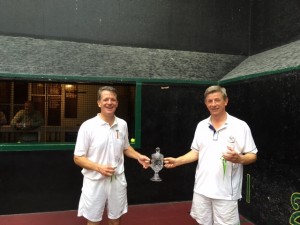 s and in the final match of the day David Fortune and John Scott came from a set down to beat another new paring of Stuart Allison and Ian McNally.

The Final – The first set went all the way to 5 all and could have gone either way but George and Charlie came up with a couple of great shots when they need them and took it 6/5.  The second set was close early on but Charlie and George found their rhythm and closed the match out for a 6/5 6/1 victory.  Both finalists now go through into the Quarter-finals of the Ellis Rich Scratch Doubles which is to be played on the 29th and 30th October.

Congratulations to Charlie and George and thank you to everyone who played and supported the tournament.

There was some fantastic tennis played throughout the weekend with pairs handicaps ranging from 33 to 65. We had 10 sets that went to a 5/5 deciding game and I think at least 5 of those went to 40 all game point! The play off group for the group runners up on the Sunday morning really went to the wire with the forth place pair missing out by head to head having been level on sets won and game difference! The final was between Will Rydon & Archie Godman-Dorrington against the experienced pairing of Jonathan Bliss & Gordon Woodman.  Archie and Will made a good start with Will playing some very steady shots and Archie playing well above his handicap but Gordon and Jonathan served very well and kept Will and Archie at the receiving end for long spells and they took the win by 8 games to 4. Congratulations to Jonathan and Gordon on a great tournament and especially to Gordon as this was a record forth Hennell Plate victory!

Also, thank you to those members that played but also to those that supported the event, it was a great tournament and we look forward to the next one! 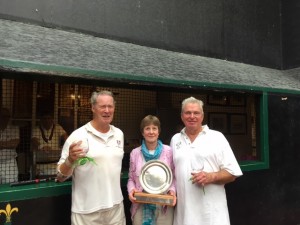