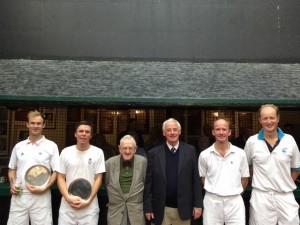 Last weekend saw some of the clubs strongest players competing in the Club level doubles.  The top seeded pair of Angus Williams & Adam Dolman got through to the final untroubled and the second seeds Andrew Page & James Acheson-Gray had an extremely tight first set in their semi-final against Mark Drysdale & Steve Calder-Smith but after being 5/3 down  they produced some fine tennis to win it 6/5 and then took hold of the match to come through 6/1 in the second.

With a packed dedans the final looked like it would be another close match but Angus and Adam were just too solid for the more experienced pairing of James & Andrew.  They won the first set 6/0, but at 2/1 in the second set Andrew & James looked like they were starting to find their form but Adam & Angus raised their level again to close the match out for a 6/0 6/2 victory.  Congratulations to Adam & Angus on a very successful tournament and thank you very much to Brian Rich and Brian Ellis for

supporting the event and presenting the trophies. Thank you also to the PHTC members that came along to support the latter stages of the tournament and to players competing in what was another great tournament.