The Two Generation family doubles tournament is now in its 27th Year and we had a full compliment with 16 pairs battling it out on Tuesday 27th and Wednesday 28th December to decide who would take the honours this year.  Players ranged in handicap from 6-75 and with ages from 11 to something over 80!

The group stages were incredibly close this year with numerous matches going the distance (6/5) and all players putting on some very good tennis. The biggest difference in handicap (39) was when the Braham’s played the Maxton’s and the handicap was rec 30, owe 15, 1 serve, banned tambour and chases 3 and 4 (plus a couple of other things) and somehow the Braham’s came through that match 6/1. 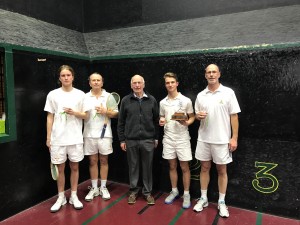 As we got to the latter stages of the tournament we ended up with two Bevan-Thomas’s and two Wood’s in the Semi-Finals and it looked like it could be a one family final but as it turned out we had one of each!  T & J Bevan-Thomas  sneaked through against M & T Wood on a 5 all forty all!  They then played a great final to beat M & S Wood by 8 games to 5 and finally win the Bevan-Thomas trophy which up until now had eluded B-T’s.  A huge thank you to David and Caroline Fortune who were at the club throughout and once again cooked some outstanding lunches which were enjoyed by all.  We look forward to another great tournament next year! 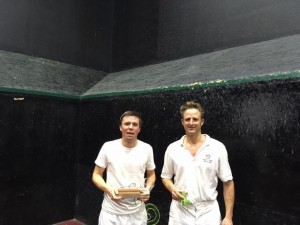 t entertaining finals we have had in recent years.  Adam started the match very well striking the ball with real venom and he took the first set 6/3.  He also started the second set strongly but Luke played his way into the set and got himself to a 5/3 lead.  Adam creeped back to 4/5 but could not quite get to 5/5 and Luke took it 6/4.  With both players having to work hard it looked like it could go either way and with Luke getting himself up in a lot of the games he could have been 3/1 up but Adam fought hard for every point and he managed to get himself a 3/1 lead.  We ended up at 4 games all and Adam played a couple of very good points to edge Luke out and with that take his first ever win against Luke and his third Andy Dawson A Grade title.

The dedan was nearly full for the match so thank you to those members that attended such a wonderful game and thanks to Andrew Page for presenting the prizes. Adam Dolman Beat Luke Danby 6/3 4/6 6/4.