What a weekend of tennis!

Wow! What a weekend of tennis we had this last weekend.  We had random pairings competing in the Secretary’s which is now in its 41st year!  Over the Friday and Saturday there were 30 sets of very close tennis played. On the Sunday morning we had four pairs playing off with the chance for three of them to progress into the Quarter-Final along with the group winners.  As it turned out both of our finalists were in this group  finishing second and third.  In the top half of the draw,  David Fortune and Ian Lambert came through a 5 all forty all against Julian Francis & Philip Smith winning the last point by about an inch! David & Ian then won another 5 all forty all against Stuart Allison & Jon Petersen in the Semi-Final and I am sure that Jon would like that forehand volley again! (sorry Jon).  In the bottom half Hugh Horne & Simon Brett seemed to get better and better, beating Ian McNally & Martin Fox 6/4 in a closely contested Quarter-Final and then comfortably beat the normally very steady paring 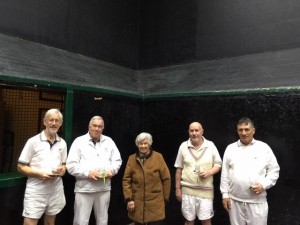 of Robert Dolman & Andrew Falk 6/1 in the Semi-Final.

So then to the final –  This was a set to 8 games and the handicap was Rec 15, Owe 30 in Simon & Hugh’s favour. The first 8 games were shared and then from 4/4 Simon & Hugh played some very good tennis to edge ahead to 7/4 and the full dedans thought that might be it but David & Ian had other ideas and after saving numerous match points levelled the match at 7 all.  Simon & Hugh then went 40/0 up but again David and Ian fought back to 40 all, so it was to be a double match point and Simon put a tricky high ball heading towards the dedans which was just too good and with that they took the win 8/7.  I think the crowd were more exhausted then the players in one of the closest finals we have ever had.

A big thank you to Lucy Hutchinson for providing lunch on Friday, to Andrew and Sally Falk for providing lunch on Saturday and Sunday and a special thank you to Fiona Lunch (wife of the first PHTC Secretary Peter Fleck) who once again watched the tennis all day on Sunday and presented our finalists with their trophies.  We look forward to next year .

Congratulations to PHTC’s Charlie Braham on winning the British Under 21 singles on Sunday.  He beat Henry Batstone in the final 6/5 6/0 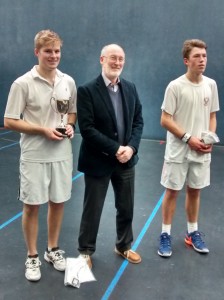 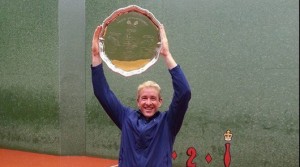 Congratulations to Ex World Champion Robert Fahey who has just been awarded an MBE in the New Year’s Honours list for his services to Real Tennis.

For 22 years Rob Fahey dominated the world stage, in all tennis playing countries across the globe. He has proved to be a model World Champion and advocate for the sport. He is without question the most successful player in the history of Tennis, having defended his World Title more times than anybody else (11 times), including Pierre Etchebaster (6 times) and Fred Covey (5 times and grandfather of Neil who is a member).  Rob also held the Doubles World Championship Crown partnering Steve Virgona from 2003 – 2015 successfully defending it 6 times.

Off the court Rob has also been a great ambassador for our sport and has made many appearances down here at PHTC whether it be for a charity doubles match with members or National League matches (as recently as last month) and we thank him for that.

Congratulations to our PHTC team which, having won the Field Trophy last season PHTC were promoted to the Pol Roger competition (which is the top division for the National Interclub knock-out event) and playing at Seacourt beat them 3-2 in the quarter-final on Sunday 14th December.

Both clubs have strong records in this competition, and have had shared many close matches over the years. Another close result appeared likely again as Seacourt lined their team up to target the three wins necessary by selecting several of their strongest players in their doubles.

The first rubber was won by Seacourt whose pairing of Tom Weaver and Spencer Davies beat Charles Fuente and Nick Harris in two close sets of high quality doubles. The second rubber was also won by Seacourt with Luke Danby beating Charlie Braham. Charlie and Luke are two of the game’s leading amateur players and both had recently enjoyed strong results in the British Open. They have had several tightly fought matches in the past, including in the final of our own club singles event, and as you would expect the play was of a very high standard, with a mix of floor play and forcing.  Luke is a formidable opponent on his home court, where his railroad serve and his cut on the ball are so effective, and it is so impressive that he continues to play at such a high level.

PHTC then pulled the match back to two rubbers all, with Adam Dolman holding off the competitive efforts of Andrew Jameson, and Mark Drysdale then beating the valiant Alex Garside.

The match was to be decided by the final rubber of the day between Andrew Page and Steve Calder-Smith and Hugh Latham and Paul Weaver. With Hugh having played off handicap of 0.8 and Paul being the current national over 60’s doubles champion the Seacourt pairing were slight favourites, however the score remained close throughout. It was a pleasure to watch Hugh’s stroke-play and timing, and see Paul’s energy on the court. Andrew and Steve played a fabulous match, they took the lead for  first time in the third set at 40/30 five games all and held on to win the match. It was a memorable game and the win for Andrew and Steve was a great achievement.

It was an enjoyable day at Seacourt, where we are always made to feel very welcome, and we thank their captain Spencer Davies for his help with the arrangements. We now play Cambridge in the semi-final on Sunday 29th January.