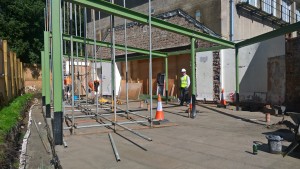 Basil Henson was not the worlds greatest exponent of real tennis, but he did have one faithful supporter. He would take his dog to sit in the dedans, an area behind the court where benches can be positioned. Every time Basil played a backhand volley, one of the more difficult shots, it would bark, said his friend John Farrall.

So enthused was Henson when he took up the esoteric sport in middle age that he played on most of the 40-plus courts throughout the world. Visits to the US, Australia, France and Lord’s were planned so as to partake in another match at another venue. He became a key administrator and, through the handicap system, continued competing until he reached 90.

Basil was a very charming man, comfortable with his own values, who raised funds for young people to participate, but self-denigrating on court and a dreadful player, Farrall said. I don’t  know why he liked the game so much.

In his red Dunlop Flash tennis shoes, Henson cut a distinctive figure. He was a founder member of the Dedanists, a nomadic club named after the area frequented by his dog. The French appellation dates back to the origins of the game. The court resembles a medieval street or marketplace; its features â€” sloping roofs (penthouses), a buttress (or tambour), openings that serve the function of goals (the dedans, the grille and the winning gallery) â€” make the game a hybrid of squash and pinball.

The forerunner to lawn tennis, it was revived in the 1970s and 1980s. Real tennis is never going to grow enormously because of the costs of the courts, said Colin Dean, who plays at Hatfield House in Hertfordshire, where Henson became treasurer, chairman, vice-president and an honorary life member. Basil was nearly 50 when he started to play, but that did not matter because of the handicap system.

A further attraction for Henson, who was introduced to the game by a neighbour in Hatfield, was the lunch. His wife, Jill, was a businesswoman and a reluctant follower of the game, Dean said. But members wives were inveigled into providing lunches. There would be two games beforehand and three afterwards. And there might have been a bit of wine consumed as well. Henson’s other sporting love was cricket, and he would ensure real tennis at Lord’s and Melbourne was fitted around Test matches.

As well as Hatfield and Lord’s, Henson favoured Hampton Court, where Henry VIII oversaw the building of the Royal Court. Real tennis is not the only game to be described as “the sport of kings” but this truly was. Charles I and Charles II were devotees and would rise at 5am or 6am to play. William III took part fortified with stoups of Spanish wine.

Henson enjoyed appearing at Queens Club in west London when he was not at Lords, where he became a member of MCC. The amount of time he spent on the game had a bearing on where he lived: Hatfield and, after the death of his wife, a flat in Primrose Hill, close to the Home of Cricket.

Basil Howard Henson grew up in Brighton. His father, 68 when Basil was born, died virtually penniless seven years later. Henson spent more than three months in hospital with typhoid. Given a free place at Royal Russell School in Croydon, he undertook his National Service in the Fleet Air Arm before attending the London School of Economics.

His contemporaries included the future cabinet ministers Reg Prentice, who became a friend, and John Stonehouse, and his lecturers included Professor Harold Laski and Ralph Miliband. None of these left-wing figures (Prentice was to switch allegiances), however, significantly influenced his politics in that he was a staunch Conservative. Henson worked for the Commonwealth Relations Office, and was subsequently a banker for Chartered Bank of India, Australia and China, and worked for the Federation of British Industries and the City & Guilds of London Institute.

Henson’s wife, Jill Hine, whom he met at a party in 1966, had worked at Bletchley Park during the war. They married the next year and did not have any children. She accompanied him on a trip to France so that he could complete his full set of courts, although more were later opened. Henson’s final appearance on court was in a doubles match at Hatfield, two days after his 90th birthday.