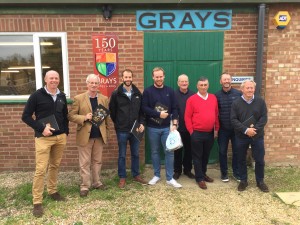 On Wednesday 4th October Tom and Louis along with 6 PHTC members travelled up to Cambridge to have a tour of the Gray’s Factory.  It was absolutely fascinating to see the 4 craftsmen at work. The rackets start with about 2 or 3 bits of wood, then go through some 60 odd processes to create the racket we love and use today. The PHTC group then headed over to the Cambridge club to play some doubles before watching Tom and Louis take on Cambridge in Division 1 of the National League.  Louis beat Alex Evans 6/0, 6/4, Tom lost out to Ed kay 3/6 4/6 and they lost the doubles 8/5 with some very good tennis on show.   A huge thank you to Martin and his team at Grays for showing us around and giving us an insight into how a real tennis racket is made. If you would be interested in doing a tour, do let us know and we will try and arrange a trip for you.

Last weekend we had our first tournament of the new season and with handicaps ranging from the mid 30’s to the early  60’s there was some very entertaining tennis on show at the club.

This year we were slightly down on numbers due to the ongoing works at the club but never the less we still had sixteen pairs battling it out all weekend.  Only one pair actually won all three of their group matches, so there were lots of very close games throughout the group stages. 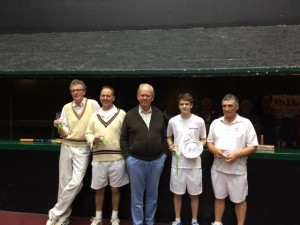 The first semi-final was between David Fortune & James Deuchar vs Will Rydon & Will Hextall.  James and David stormed to a 5/2 lead only needing one more game to make the final but the two Wills played some very measured tennis taking the pace of the ball (which James was not so keen on!) to mount a huge comeback and take the set by 6 games to 5.  In the other semi-final it was Ian Lambert & Monty Dix vs Mike Rogers & Julian Hill. The combination of power from Monty and Ian’s retrieving was too much for Mike and Julian, they won by 6 games to 2.

On to the final, Will and Will were having to give some 14 points away to Monty and Ian (owe 30, rec 15) and early on in the match it was very tight, at 4/2 there was a very close game which went to Monty and Ian and they then ran away to a 7/2 lead, but Will and Will won the next one and then got to forty all at 3/7 but couldn’t quite take it so Ian and Monty won by 8 games to 3 in a very nice final. Congratulations to Ian and Monty!

Thank you to Philip Robinson for presenting the prizes and to those members who very kindly supplied some biscuits and all those members that watched the final.  We look forward to our next event which is the Robinson Trophy Scratch Doubles on the 28th and 29th October.