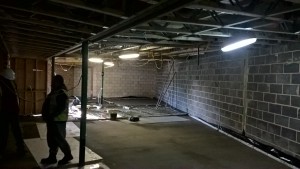 On Sunday Petworth hosted The Queens Club in a highly anticipated Quarter-final match of the Pol Roger Trophy (top interclub tournament) and the match did not disappoint!

Sadly PHTC were without Charlie Braham due to injury but still fielded a pretty strong team.  First on was the 2nd string doubles pairing of Nick Harris & Andrew Page against Martin Higney & Nick James from Queens.  Nick and Andrew started off very well going 3/1 up in the first set, but with some very good play from the Queens players they soon found themselves 4/6 1/4 down. Nick and Andrew changed tactics slightly and managed to fight back and win the set 6/5 saving at least two match points.  The final set was pretty close with PHTC leading early on but the Queens pair were slightly steadier and closed out the match for a 6/4 5/6 6/3 victory. Queens 1/0

In the 1st string singles PHTC’s Adam Dolman took on old foe Tom Seymour-Mead. Tom started strongly going 4/1 up but Adam started to find his rhythm and soon came back to win the set 6/4Â  and build a healthy lead in the second set.  There were some very impressive points with both players digging out some unbelievable gets. Adam went 5/4 up, 40/30 with a chase of 1 & 2. He served a pretty good high serve but Tom hit an incredibly good curt volley down to better than a yard to win the chase and he also came back to win the set 6/5.  Now seemingly full of energy Tom was ahead all the way through the final set and despite a late fight back from Adam he took the match 4/6 6/5 6/3. Queens now 2/0

With the first two matches taking nearly 5 hours between them the next match needed to be more straight forward for PHTC and it was.  Angus Williams playing for the first time for PHTC beat Harry Eddis 6/3 6/2 in a really solid performance to get one back for us.

Mark Drysdale then took on John Prenn in what looked on paper to be a very tight game but John was in top form and never really let Mark in.  He won the match 6/2 6/0 and with it the overall win 3/1

The final match of the day was sadly a dead rubber but Luke Danby & Charles Fuente beat James Coyne & Dom Wright 6/4 3/6 6/5 in a very entertaining match with some incredible retrieving from both pairs.

The overall result was a 3/2 victory for Queens Club.  Well played to them and a big thank you to Harvey Rawlings for Captaining our team, to Philip Robinson for organising a lunch at the Angel Inn and showering facilities for the Queens players and also to Robert and Carole Muir for lending the PHTC side their showering facilities.