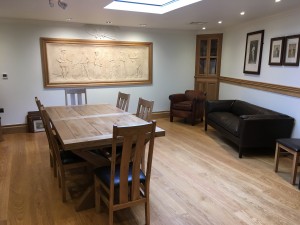 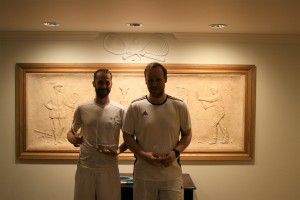 It has been an eventful and successful season for PHTC in the 2017/18 IRTPA National League. Due to the extension works taking place all four of our teams had to play their 4 away matches before Christmas with the hope to then have 4 home matches in the New Year but sadly as the works overran slightly we had to play some of our home matches on an away court and Seacourt Tennis Club very kindly hosted our players.  In division 8, our team was Captained by Stuart Allison and the team put up a good fight in all matches but sadly finished last in the division.  Our Division 7 team was captained by Jon Petersen and again they had some fantastic matches but just missed out on the play offs.  Division 5 was captained by Bill Chambers and despite playing some of the matches with just two players Bill and Chris Swan (and a little help from Tara Lumley!) finished 2nd in the Division. The trio are then won their semi final and a now waiting to play the final which has been postponed to September and will be played at the Oxford Court. 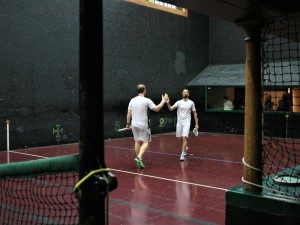 Again, we had to play our first 4 matches on away courts and Louis and I had our toughest match first up which was away against Cambridge.  Tough it was, and we lost out 2/1 but after that we went on to win our next 7 matches, 4 of which were played at PHTC with he last two being very well supported by members in our great new facilities! One very notable result was Louis beating one leading UK Amateur Ed Kay by 2 sets to 1.

By finishing top of the division, we hosted the final on the 31st May and it was Cambridge who won the semi final and so it was a third and deciding match to decide the winner. I put us in a good position beating Alex Evans 6/2 6/0. Ed kay was then determined to get his revenge on Louis and did so with a straight sets win so it was down to the deciding doubles and after a 7-match winning streak for us we carried on with comfortable 8/3 victory and with that the title for Division 1!