What a feast of tennis we had last week! 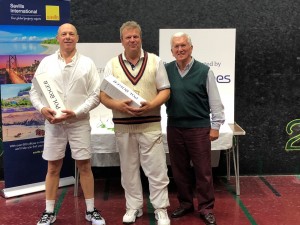 32 pairs, 860 games, 72 sets, two markers and over 46 hours of play from Wednesday to Sunday and pairs ranging from handicap 12.6 to 60.3 there were all standards taking part.

With 3 out of the 4 pairs in each group progressing through to the knockout stages it gave everyone a good chance.  On Thursday evening we had a fabulous curry night hosted by David and Carline Fortune and some fantastic play from a very strong group. The strongest group on handicap  played on Friday from 5-9pm in front of a packed dedans, some of which were taking part in a wine tasting kindly hosted by PHTC member James Simpson from Pol Roger and Henning’s Wine in Petworth. All four pairs were under 24 handicap and it really was a great atmosphere, followed by a lovely dinner hosted by Andrew and Sally Falk. 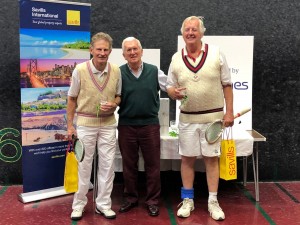 Saturday morning was the start of the last 32 matches with some close ones and some one sided ones with some strong pairs still making it through.  From 13.00 we had the most of the last 16 matches and one stand out result was Nick Warner and Bill Chambers beating Andrew Falk and Tim Parker 6/0 off rec 30, owe 30 and only losing 3 points in total (sorry Andrew and Tim).  Could they be the winning pair…

On Saturday evening the court was absolutely transformed for the tournament dinner.  Lesley Dolman did an amazing job with an endless supply of fairy lights lighting up the court and tables ready for 95 members and guests.  We had a delicious 4 course dinner followed by coffee and speeches from our Vice Chairman/ Tournament Organiser Robert Dolman and Chairman Philip Robinson.

On to the quarter-finals and all of the matches were very close, but the new favourites were pipped 8/7 by

The final was played in a great spirit and it was nip and tuck all the way to 7 all,  40 all when Stuart Allison was presented with a ball on the backwall at the service end and lucky for him he remembered all of those lessons and placed the ball down to the base of the tambour to take the victory with partner Simon Gray. The final and in fact the whole tournament was played in fantastic spirit and myself and Louis had a great time marking every match. Congratulations to Simon and Stuart!

A huge thank you to Carolyn Armstrong -Smith for supplying a fabulous lunch every day for players and guests, to Lesley Dolman for Dinner on Wednesday evening and supplying and setting up the lights for the Saturday dinner, David and Caroline Fortune for a fabulous curry on Thursday night, Andrew and Sally Falk for dinner on Friday night, Carole Muir for the Saturday evening dinner arrangements and to Lyn Robinson for the table flowers for the dinner but a special thank you to Robert Dolman who has put in a huge amount of time and effort recruiting  players and replacing players and was at the club for every single ball that was struck during the tournament!

We all look forward to the next big event at the club!