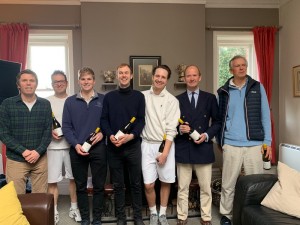 Seacourt’s youthful 2nd pairing of William Flynn and Henry Liddington proved too strong and agile for Petworth’s experienced Charles Fuente and Andrew Page (6/2, 6/2) who struggled to find the necessary consistency to unsettle their opponents. Charlie Braham has been struggling with arthritis in his playing hand which was a hindrance against a domineering Luke Danby who strolled to a 6/1, 6/2 win in the 1st singles. The 2nd singles was one of the shortest on record when Seacourt’s Hugh latham pulled a fetlock after only three points in the first game thus gifting Petworth and Adam Dolman a lifeline. Several handicap points lower, Petworth’s Angus Williams (6/2, 6/2) was too strong in the 3rd Singles for Lea Van der Zwalmen, who nonetheless showed why she is now the leading women’s amateur but she struggled to force winners against Angus whose retrieving was first class. So at 2/2 the match result depended on the 1st doubles. Would we be treated to the first three setter of the day? Charles Danby and Mark McMurragh rushed into an early 3/0 lead but Petworth’s Bill Chambers and Steve Calder-Smith reduced the deficit to 2/3, but allowed their opponents to take the set with ease. The 2nd set was a closer affair and at 5/3 up the Seacourt pair were guilty of relaxing and allowing Petworth back into the game at 5/5. However, Danby and McMurragh were at the service end in the final game which proved decisive, securing a well-deserved Field Trophy win. Photo of PHTC team