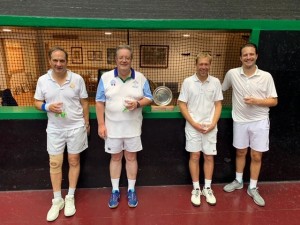 Although we had a slightly smaller than usual entry, it was full of quality!  In the group stages quite unusually every group had a pair that were undefeated in their three matches with the defending champions Robert Dolman & Hereward Taylor looking in fine form losing only 3 games in 3 sets!  The quarter-finals started at 12 noon on the Sunday. In the Semi-Finals it was the Michael Marcar & Simon Armstrong that beat Hereward & Robert 6/2 to knock out the chaps and the last minute paring of Richard Blackburn & Bill Chambers (Bill filled in for Kate Rowe due to injury). They beat Carolyn Armstrong-Smith & Oliver Harris 6/3 with a difference of 25 points!  So the final was then between the two strongest pairs (31 and 35) in the tournament which has not happened for a long time and what a final it was! Michael and Simon battled well early on but it was the younger paring of Bill and Richard that seemed to have all the answers and went on to a 4/1 lead. The next four games were shared but from 6/3 Bill stamped his authority on the match to snuff out Simon and Michael hopes to take the victory 8 games to 3.

A big thank you to Carolyn Armstrong-Smith for lunch on Friday and to Jane Taylor for cooking lunch throughout Saturday and Sunday as well as playing!

Make sure you look out for the date next year nice and early!