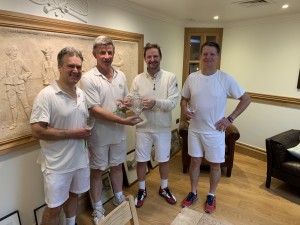 The Robinson Trophy Scratch Doubles took place last weekend and as usual did not disappoint! Although the field was slightly shorter this year there was no lack of quality in the matches! The tournament started on the Saturday with two quarter final matches with the winners going through to play the top 2 seeds in the semi-finals. The first match saw Hereward Taylor and Charlie Maunder take on Tim Armstrong and John Priestland and win 5/6 6/4 6/4 in an incredibly tight match that really could have gone either way. Then we had David Fortune and Fergus Jenkins vs Simon Armstrong and Adrian Warburton, David and Fergus struggled to get going in the first set losing 6/2 but managed to find some form in the second to get to 5/5, but Simon and Adrian continued to power through and took the set 6/5

The first semi-final was between the number 1 seeds (and current holders) Nick Chambers and George Andrews vs Simon and Adrian, in this match it would be Simon and Adrian who couldn’t quite find a way through, losing the first set 6/1, then battling hard in the second to narrowly lose 6/5! The second semi final saw Hereward and Charlie take on the number 2 seeds Jon Petersen and Andrew Falk, Hereward and Charlie dominated throughout to cause an upset winning 6/2 6/3

On to the final, Hereward and Charlie Vs Nick and George, and it did not disappoint!

Nick and George came out of the blocks firing on all cylinders to win a very convincing first set 6/0! But Hereward and Charlie were not going to give up that easily, and with a bit of tactics discussions managed to take the second set 6/3, this match could really have gone either way! However it would be Nick and George who held their nerve winning the final set 6/3.

Congratulations to Nick and George on winning this years Robinson Trophy Level Doubles!

Well played to all of our competitors and we hope to see you all again next year!

Nick and George and Hereward and Charlie have now both qualified for the Ellis-Rich Scratch Doubles Tournament being held on the 23/24th November, be sure you don’t miss it!