Access to non-members is encouraged to see the court with its historic collection of rackets and memorabilia, and watch real tennis being played, at any time. The court is open during playing hours and visits will be facilitated by the Professionals.

THE 16th CENTURY:
It seems that there have been as many six tennis courts at Petworth House, the earliest dating from 1588. There is an entry in the household accounts for £4 2s 2d for plastering and paving tennis courts. This record of more than four hundred years as a site for tennis is only exceeded at the royal palaces of Hampton Court and Falkland. Some historians have suggested that Henry Vlll, himself a great tennis fanatic, may have built courts at Petworth even earlier. As the 6th Earl of Northumberland had no direct heir and as many of his family were implicated in Catholic plots, in 1537 he left his lands to the king, probably in en effort to keep in favour with him. However in 1557, Queen Mary returned Petworth to the Percy family.

THE 17th CENTURY:
The interest of the Percy family in tennis was maintained. The ninth Earl spent the years 1605 to 1621 in the Tower of London, under suspicion of complicity in the Gunpowder Plot, but during his period of incarceration, he made plans for substantial building work to be done on his release. He owned both Syon House in Isleworth and Petworth House, and his plans included a Tennis court at Syon House. However a condition of his release from the Tower was that he must not venture more than thirty miles from Petworth House, so the Syon House court was never built.His Clerk of Works drew up what became known as the “Petworth List” in 1615. It contained the names and dimensions of fourteen courts in London, presumably to use as models for his own courts. On display in a cabinet at the court is a contemporary copy of the list and a map showing the location of the fourteen courts.

Records show that the third Petworth court was built in the “Cichen Yarde” (old spelling for “Kitchen Garden”), and it was probably thatched. In 1654, Nicholas Paige was paid for “layeing on eight loads of straw on the Tennis Court att 5.0s”. The dimensions of this court as noted in “The Percies of Petworth 1574-1632” are difficult to reconcile. The main wall was said to be 94ft long, the gallery wall 97ft, and the penthouse 101ft.

It had been thought that James Duke of York (later James ll) had played on the Petworth court, but in the Petworth House archives, there are eleven pages of expenses related to play on the court at St. James’s Palace in London, a court built in 1617. The tenth Earl of Northumberland had charge of the three youngest children of Charles l during the course of the Civil War while they were confined to London. 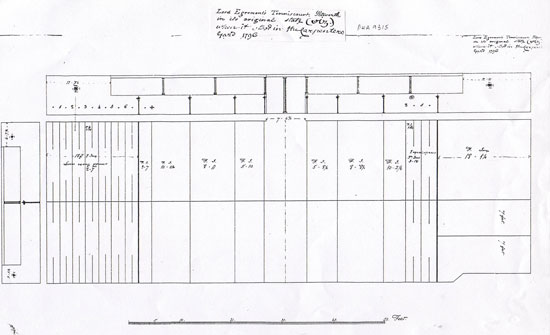 a plan of the court at Petworth House which shows that at that time there were no door galleries.

THE 18th CENTURY:
The court was demolished in 1695; the next court was built in 1700 by the sixth Duke of Somerset, who rebuilt much of the present Petworth House. This court was sited somewhere in the Carpenters’ Yard, now known as the Estate Yard, where the present court stands, though probably not on the same site. Presumably the roof on this court was found to be too low for play, as towards the end of 1791, items of expenditure are noted as sashes and frames “a story higher” and “Raising the Tennis Court House”, as well as “getting out and carrying up a stairs at ye Tennis Court”.

This Tennis Court served as the Petworth courthouse in 1795, but even after all this building and later expansion on the court, in February 1797 it was torn down stone by stone and moved to a new site at the north end of the house. In the process a rare omission was corrected. The 1700 court had no door galleries, but in this new court (the fifth) a door was installed and payment of 1s 6d was made to “Willm. Nightingale for turning two columns for the tennis court”.

THE 19th CENTURY:
Among the keen players of Tennis at Petworth at this time was the Reverend Thomas Sockett, Rector of Petworth and tutor to Lord Egremont’s children. On 17th October 1805, he played with the Duc de Berry from Paris, but he “was disappointed and could give him 30”. And on 1st May 1806, probably in London, he “watched a match between Barcellon and Cox, the latter gave B(arcellon) 3 bisques: B(arcellon) won the first two sets which decided the match, it being for the best of three sets; it was well contested.”

In February 1822, the 3rd Earl gave a ball at Petworth House, and a plan in the Petworth House Archives shows the court, which measured 90ft by 30ft, fitted out internally for “an eating room”, i.e. it was used as a supper room for his guests.

The last court to be built at Petworth is of course the present one and this was in 1872. Its position in the Estate Yard is quite close to the original position of the court built so long before in the Carpenters’ Yard. Most of the stones used for its construction came from the earlier court. It is said that while the second Lord Leconfield was lying ill in bed, he could not bear the noise of the balls bouncing on the penthouse.

This period of the 1870s was a period of expansion for English Real Tennis courts, and some might say that it was the decade for the building of classic courts, several still in regular use. At this time, the floor was chocolate brown in colour, the walls were black and the lines on the floor were light green. Experts considered the speed of the court to be mid-way between Lord Wimborne’s slow court at Canford, and the fast Moreton Morrell court owned by Mr. Garland.

1900 TO 1959:
In this new court, a recurring problem was damp upon the floor. The earlier courts had been supported on arches and thus were not prone to damp. In 1903, Joseph Bickley, the well-known builder of Tennis, Rackets and Fives courts, was brought in to remedy the situation. He made recommendations for improvement round the foundations, but in the event, he was only required to stain the floor and paint the lines, for which he was paid £25. 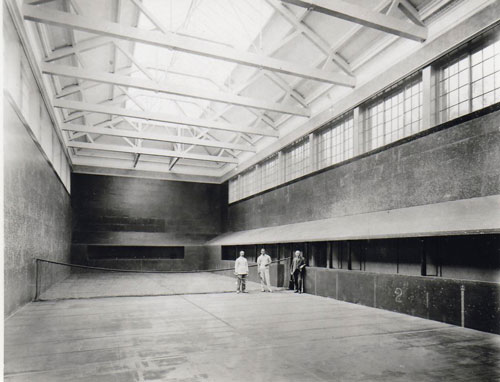 Arthur Smith, the Professional on the left, an unidentified player in the centre, and Joseph Bickley on the right.

Not surprisingly, damp problems continued, and in 1908/1909, Bickley was called back to tackle the foundations. He suggested laying large hot-water pipes in a trench below the net to help keep the floor dry and to assist with ventilation. The work was not carried out, and the frequent appearance of condensation on the walls, which regularly closed the court to use, was eventually dealt with by the installation of additional court heating. At this time, Bickley also supervised the removal of wing-nets, the installation of skylights, and the redecoration of all the woodwork in the roof area.

The photo was taken by Bedford Lemere, photographers to H.M. The King Edward Vll during Bickley’s renovation work on the Petworth court.

Although the formation of a club was still a good fifty years away, the third Lord Leconfield was very generous in allowing local residents and other visitors to use his court. An informal list of twenty-four or so names existed, and the list included the Duke of Richmond and Gordon, who had his own court at Goodwood House, and Mr J F Marshall, who built his own court at Seacourt. 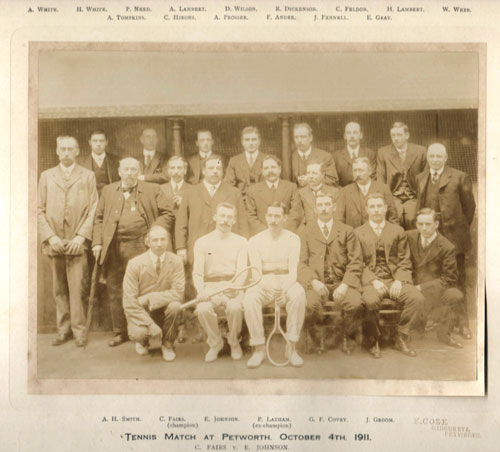 The captioned group photo taken on the occasion of the match between Fairs and Johnson. 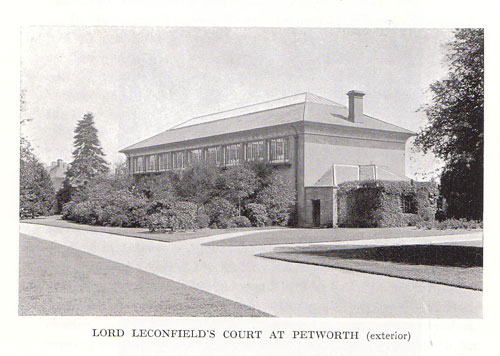 During the 1st World War, the court was very lightly used; for some period during 1914-1918, the court was used for billeting military personnel including soldiers of the Rifle Brigade and the King’s Royal Rifle Corps. It was noted that the phone wire connecting the Tennis court to the outside world ran from what was then the London, County and Westminster Bank, now Natwest Bank at the top of the square.

Very little Tennis was played at Petworth after 1920, though it is recorded that Lord Leconfield continued to stage annual exhibition matches between leading professionals. Indeed, on October 24th 1928, Willie Ratcliffe (Queen’s Club) played an exhibition against Jack Groom (Lord’s) and won by 3 sets to 1.

It is certain that from 1941 to the reopening in 1960, no Tennis at all was played. During the period after 1941, the court seems to have been used amongst other things for the storage of grain. Indeed, it is recounted that occasionally, the gamekeeper had to go into the court to shoot rats and squirrels. When the inside of the court was renovated prior to its reopening in 1960, the inside of the ceiling was found to be peppered with buckshot! 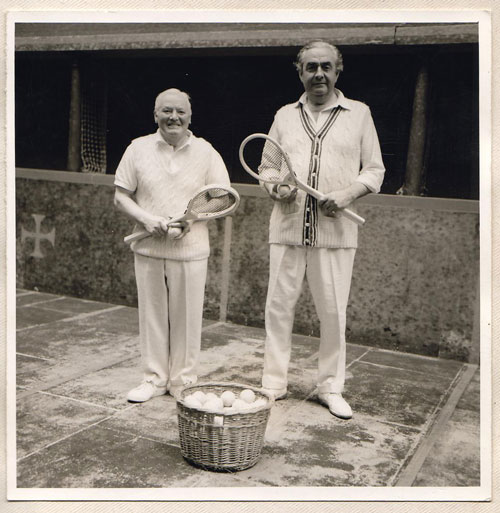 Tennis was restarted at Petworth when Andy Dawson, who had recently moved from Holyport to West Sussex, inspired the revival of the court by setting up a club to use the court. This was done with the great assistance of Lord Egremont and the National Trust, the owners of Petworth House.

The court was officially reopened with a nucleus of keen players on Sunday 3rd April 1960. Although at this time there was no Professional, amongst those present that day was former Petworth Professional Frank Latham, this being the only known photo of him on the Petworth court. He had long ago retired but returned for the reopening. 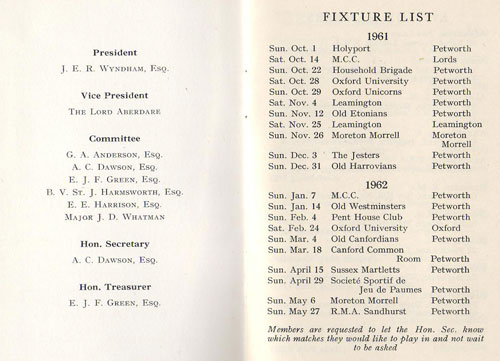 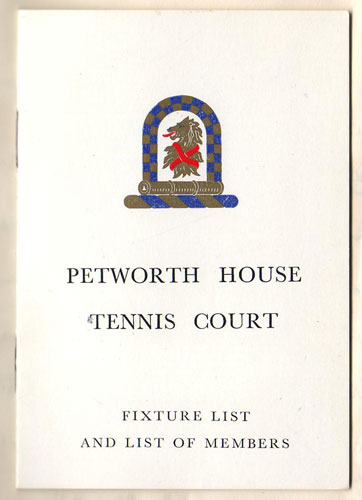 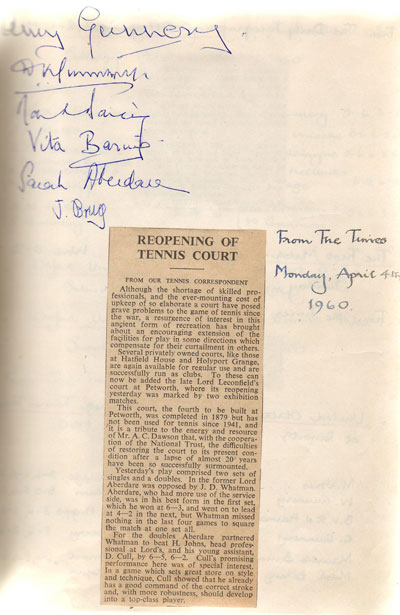 On Sunday April 19th 1964, the Amateurs vs Professionals match was played at Petworth. 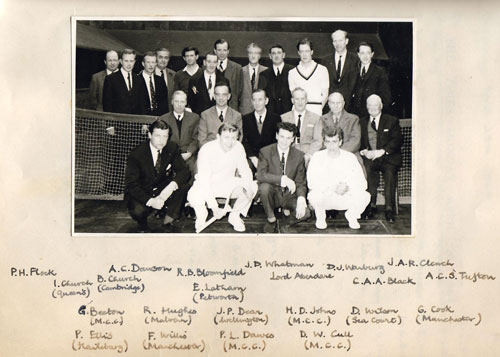 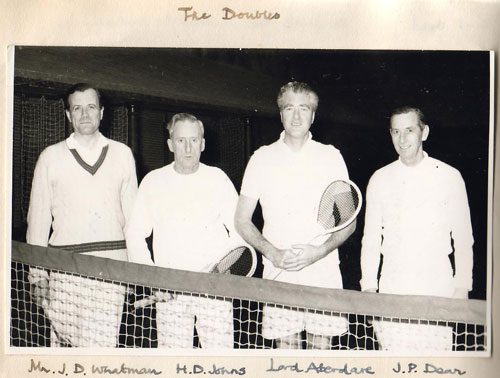 In 1968, the Penthouse Club, which was based at Alderson Horne’s miniature court at Ditton Place in Balcombe, was forced to close down, so the members transferred en bloc to Petworth House. They gave a cup for a handicap singles to be called The Penthouse Cup to perpetuate their name and this cup is still played for annually.

In May 1974, the Browning Cup, a handicap competition for Professionals, was revived and played at Petworth House. The club made use of stepped-up boards in the dedans to provide extra accommodation for spectators and ran benches down the galleries. Most of the top Professionals competed. The winner was Mick Dean (receive 15 and a bisque) of Oxford who defeated Norwood Cripps (owe half 30) of The Queen’s Club in a gruelling 3 hour match by 3 sets to 2.

In 1977 and 1978, the Amateur Doubles Championship was played at Petworth House. Alan Lovell and Andrew Windham defeated Howard Angus and David Warburg in both finals.

In 1978, there was restoration of the dedans and the ancillary areas, creating improved facilities for the players. The floor of the court was repainted for the second or possibly the third time since the Portland stone slabs were originally laid in 1872.

In 1988, The Browning Cup was again played at Petworth, and on this occasion, Kevin Sheldon beat Colin Lumley. On Sunday 9th May 1999, a lunch was held at The Chantry in Storrington, the home of the Chairman David Godfrey, to celebrate the 40th Anniversary of the reopening of the court and the foundation of the club called Petworth House Tennis Court.

To celebrate the arrival of the New Millennium on 1st January 2000, a keen group of P.H.T.C. members enjoyed a champagne breakfast and several hours of reasonably competitive doubles Tennis. During the summer of 2000, the interior of the court was renovated and repainted, following a detailed analysis of previous layers of paint (taken from some 28 sites around the court) which had been applied since the court had been built in 1872. At this time, the Wyndham coat of arms was painted high up on the Hazard end wall.

ACKNOWLEDGEMENTS (as at 01 October 2006):
The authors, Brian Rich and Alan Chalmers, wish to place on the record their grateful thanks for the inclusion of photographs, information and documents to the following: