Tennis clubs had their own Professionals from the early 1800s; as with most private Tennis courts in the great estates, such as Petworth, Canford, Hatfield House, Hardwick House etc, it was the custom to employ a Professional, whose job it was to play with his patron and his guests, make the balls, and generally be responsible for the upkeep and maintenance of the court. Petworth has benefited from the expertise of several major figures from the tiny world of Tennis Professionals, as follows: 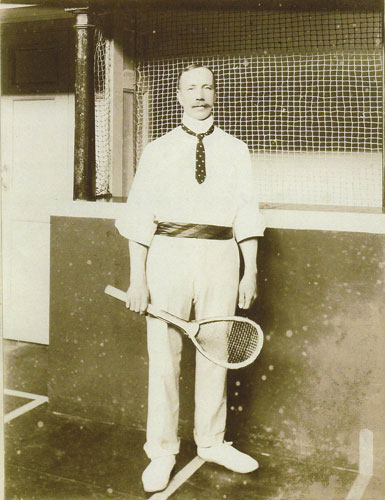 ARTHUR “TENNIS” SMITH (Professional 1902 to 1914) is the first recorded Professional at Petworth. He entered Lord Leconfield’s service on 7th September 1902. He was born on September 13th 1870, and became an assistant at Lord’s in the Rackets court on December 23rd 1883. Smith’s father was a friend of George Lambert, who made the introduction to Lord’s. In May 1890, Smith moved to the Lord’s Tennis court under Jimmie Fennell, who had just been made head Professional in the place of George Lambert. While Smith was at Lord’s he marked all the major public matches from 1893 to 1902.

Smith featured in challenge matches against Cecil “Punch” Fairs at Prince’s Club (Brighton) in May 1894, and the return match at Lord’s in 1895. He gave competition a miss from then until January 1909, when he defeated the reigning Rackets champion C. Williams by 3 sets to 1.

Having been well schooled in the art of the Tennis Professional by Fennell, Smith moved on to Lord Leconfield’s court at Petworth. When Smith arrived at Petworth, Tennis was virtually dead, but he managed to produce a small number of reasonable players. His skill by now was as an admirable teacher of perfect technique, rather than as a high level competition player. Smith’s pay is listed as fifty shillings a week in 1914. In the years leading up to the First World War, Lord Leconfield staged exhibition matches in which a number of leading Professionals competed.

Smith retired in 1914 mostly because of an arm injury, and he emigrated to South Africa. The position of Professional to Lord Leconfield was left open until after the end of the First World War. 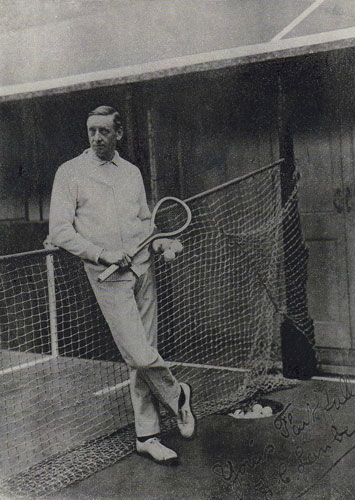 Lamberts had also been Professionals at Oxford and Hampton Court. His uncle, Joseph, was Professional at Hatfield House from 1849-1905 and was still playing in his eighties. Joseph’s father, George, was an outstanding player who claimed the World Championship in 1871, and then dominated the game to such an extent that he remained unchallenged for fourteen years, eventually losing to Tom Pettitt of the USA by 7 sets to 5 at Hampton Court. Harry was thus steeped in the game of Tennis.

Harry had visited Petworth several times before 1918, and in fact was turned down for the Professional job in 1916. But he was appointed Professional at Petworth in November 1918, and the court was well used in that period. It is alleged that as Lord Leconfield had some difficulty in getting his shots over the high points of the net, it was lowered by six inches at each end whenever he played.

Lord Leconfield staged regular top class matches at Petworth, and in one of these on May 29th 1919, Lambert beat R C E Dickinson 2/6 6/5 5/6 6/4 6/0, the match being marked by James Fennell (Lord’s). Lambert can be traced as still being at Petworth upto 1927. But thereafter, he is listed as representing Lord’s, so it looks as though there was no Professional at Petworth from 1928 until Latham was appointed in 1938.

FRANK “EMILE” LATHAM was the son of Peter Latham, the World Tennis Champion 1895-1907, and the World Rackets Champion 1887-1902, and the only player to hold both titles simultaneously. Frank had the nickname “Emile” and this is believed to acknowledge the fact that Real Tennis was dominated at that time by Pierre Etchebaster, and it was considered fashionable amongst some Professionals to adopt a French name.

Frank trained initially at Lord’s and in July 1920, he went to be Professional in Paris. It is not known exactly when Latham was first employed at Petworth, nor for how long, but there is no record of Tennis being played after 1941, as the court was being used as a storage facility. It is known however that Latham was a Professional at Lord’s from 1929 to 1937. In 1933 he won the Browning Cup at Leamington playing under the Lord’s banner. But in 1939 he is listed in the Browning Cup draw as being at Petworth, so presumably his service at Petworth was from about 1938 to 1940 only.

Both Ronnie Hughes (later Rackets Professional at Malvern College) and Peter Ashford (later Rackets Professional at Winchester) recall Frank Latham at Lord’s from about 1957/58 and that he was a genial Professional, who enjoyed both a modest gamble and a modest glass or two. The Lord’s Committee minutes disclose that in 1957, the secretary was given leave to approach Latham, then at The Queen’s Club, to persuade him to rejoin the Lord’s staff.
Latham attended the reopening of the Petworth court on 3rd April 1960; the programme dated 19th April 1964, when the Amateurs played the Professionals at Petworth, discloses that Latham marked one of the matches that day. He died later that year in his mid-60s. 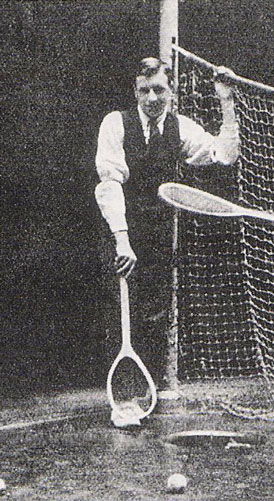 Charles Osborne photographed at Prince’s Brighton in the 1920s

CHARLES OSBORNE formerly Professional at Prince’s Club in Brighton, was employed occasionally to mark important matches at Petworth House; in the Petworth match book, he is listed as marking most of the club matches from October 1965 through until December 1967. 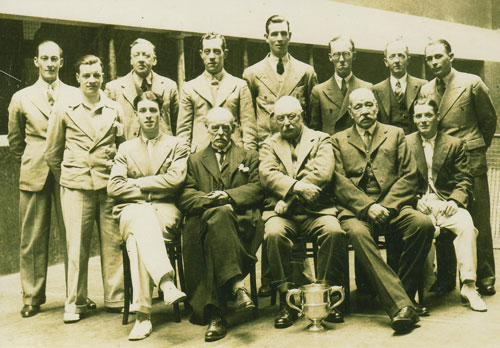 Taken at the Prince’s Club in Brighton in 1936 on the occasion of the playing of the Browning Cup, the handicap tournament for Professional Tennis players 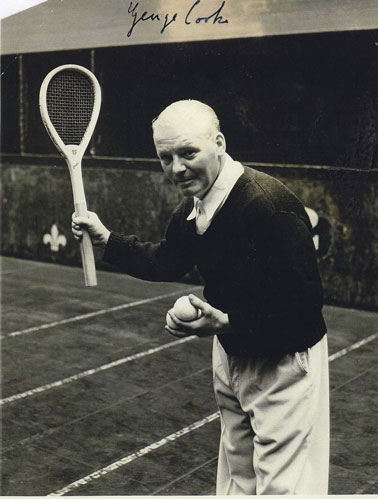 GEORGE COOKE came to live on the estate in 1971 following his retirement after fifty years’ service as professional at Manchester. In the Petworth entry in “The Willis Faber Book of Tennis & Rackets” by Lord Aberdare (1980), Denis Smith-Bingham wrote:

“George Cooke was much loved by all who came in contact with him. Although, owing to failing health, he was unable to play, he offered enormous encouragement by coaching any player who needed his advice. During the eight years he was at Petworth, he worked tirelessly to maintain the court and surroundings, marked all matches and was always ready to mark individual games. Since he died in 1978, Mrs Cooke has been a pillar of strength in generally helping look after the court, assisting at social functions and spreading good humour in all directions. But woebetide you if she caught you throwing the ball basket back along the floor having emptied the contents into the dedans trough!”

Mrs Cooke used to keep the court booking sheets at her house, and although one could often just turn up and play, in order to be sure to get a court, a member would either have to phone or visit Mrs Cooke. The court sessions were one and a half hours at that time.
After George Cooke died in 1978, PETER DAWES, the Professional at Seacourt, assisted PHTC greatly by making and supplying balls, and occasionally marking important matches; otherwise for the following few years, there was no Professional at Petworth.

GERARD “GED” PARSONS moved from The Queen’s Club and was appointed temporary Professional in May 1984; for a period he worked only at weekends, as there was insufficient court demand to justify longer hours. In due course, he worked for several days a week and remained in post until April 1985. He then left the game for a few years, but is now assistant Professional back at The Queen’s Club again.

ROB MOYLE, assistant Professional at Seacourt, joined Petworth as Professional in September 1985 and he remained at Petworth until May 1988, when he moved up to Desmond Dene.

CHRIS BRAY was appointed Professional in June 1988, after being trained by Brian Church at Cambridge (from September 1982) and then by Peter Dawes at Seacourt (Hayling Island), where he was Assistant Professional.

Chris Bray’s time at Petworth, which he left in 2005, included magnificent tournament achievements by him during which time he became variously Open Singles Champion of Australia, France, the USA, and Great Britain; he was also Professional Singles Champion of Great Britain and the USA, and on top of that amazing haul, he accumulated fourteen Open Doubles titles across the world. 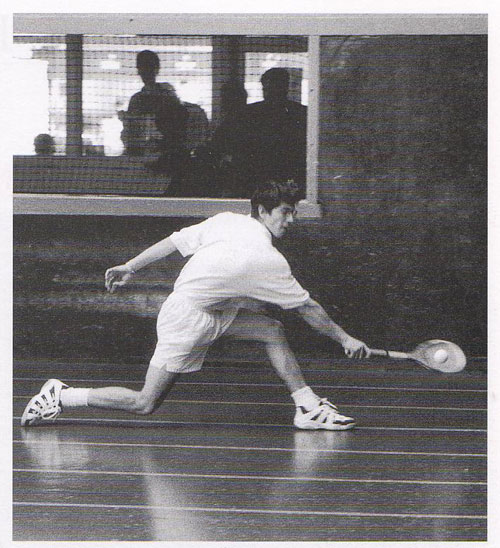 NICK WOOD started playing at Jesmond Dene in Newcastle at the age of 14. His first success came at 17 when he won the British Under 18 Championships as an amateur. The next day he joined the professional ranks, studying the game under the tutelage of former World Champion, Chris Ronaldson at Hampton Court Palace. Nick carried on his successes through the age groups winning both the British Under 21s and Under 24s on three successive occasions. Nick broke in to the senior ranks by winning the 1998 European Open in Paris.

In September 1998 Nick became the head professional at the Holyport Real Tennis Club and celebrated his new appointment by winning the inaugural Dresdner Kleinwort Benson Classic Singles & Doubles at Hampton Court. Nick and his then assistant, Steve Virgona won the 1999 I.R.T.P.A. National League for Holyport. The year 2000 was probably Nick’s most successful, winning the British Professional Championships, the US Professional Singles Championships, the Seacourt Silver Racket and reaching the final of the Australian Open Singles. In the 2002/03 season Nick defeated World Champion Rob Fahey en route to securing another Premier Division Title with new partner Andrew Lyons, competed in the World Championships, losing to Tim Chisholm.

In recent years Nick has proved himself to be one of the game’s greatest exponents, often described as a ‘classic player’, he is the favourite among the ‘purists’ and has won numerous Open Doubles Titles. Nick qualified for the World Championship in 2004 and 2006 but due to injury was unable to participate. In November 2005 Nick moved from Holyport to become the Head Professional at The Petworth House Tennis Court. Following a series of changes in the world of the Tennis Professionals, Nick moved back to the Royal Tennis Court to take over the position of Head Professional in March 2008.

CHRIS BRAY returned to Petworth as Head Professional in March 2008, following Nick Wood’s departure for Hampton Court. Chris left in November 2015 to take part in the running of Middlesex RTC.