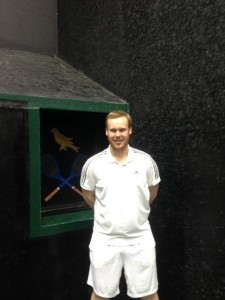 Louis started playing real tennis aged 12 at Seacourt Tennis Club, Hayling Island. Aged 19 he won the Seacourt Silver Racquet and got down to a handicap of 10.

After a brief spell working at Seacourt he made the decision to leave the game and in 2011 he started work in the retail industry with Topshop.

Louis still played Real Tennis on a social level but, after much thought, in November 2015 he decided to join Petworth as Trainee Assistant Professional. Under the guidance of Head Professional Tom Durack, Louis attained his CPD Level 1 in May 2016 and is now working towards his Level 2.