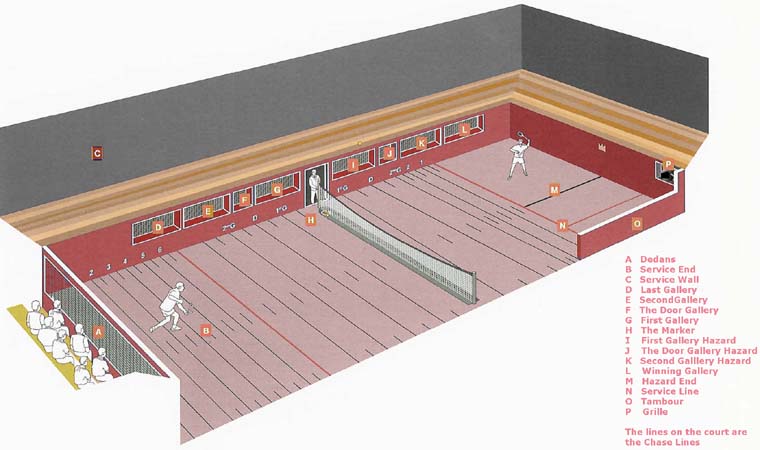 Points are won or lost when errors are made (e.g. by hitting the ball into the net or out of the court). They may also be won by striking the ball into the winning openings (i.e. the dedans, grille or winning gallery) or so that it bounces on the floor for the second time between the service line and the end wall at the hazard end. If a ball bounces twice anywhere else on the court or enters any other gallery before a player touches it, a chase is “laid”.

Scoring in Real Tennis is the same as that adopted by lawn tennis (0, 15, 30, 40, deuce, advantage, game). However, in Real Tennis, the score of the winner of the previous point is always called first. The first player to six games wins the set, unlike lawn tennis where a two game advantage must be established to win a set.

When a chase is “laid” the score does not change, that chase is noted and held in abeyance until the chase is played off. When two chases have been laid, or if there is one chase outstanding and the score is at game point (e.g. one player is at 40 or advantage), the players change ends.

After changing ends, the chase or chases are played off in the order in which they were laid. When chases are played off, the receiving player (or server in the case of a hazard chase) must hit his/her shots so that their second bounce is closer to the back wall than the chase being played (e.g. if the chase is 6-yards, he/she must play to 5,4,3,2 or 1 yard or the point is lost. If the ball will fall short of 6 yards on the second bounce a shot does not have to be played, and the point is won by the server).

The lines on the floor are positioned to mark the floor equivalents of gallery chases, and to measure the length of the other floor chases in yards from the back wall (e.g. if the second bounce was on the 6-yard line, then chase 6 has been laid). Chases that occur at the hazard end are called hazard chases.